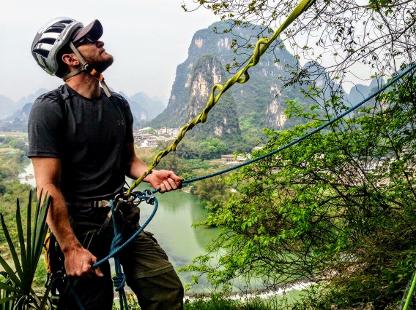 My name is Scott Gregory Stewart. I am 41 years old and I am originally from the state of Michigan. My wife's name is Neyda Moulier and she's from the Caribbean island of Puerto Rico. For over a decade she has been helping me perfect my Spanish and encouraging me to follow my dreams.  I am one-minute older than my identical twin brother and best friend Ryan. I graduated with honors from Mount Saint Mary's University in Emmitsburg Maryland with bachelor's degrees in Business and Spanish. Since then I have earned a professional teaching license in physical education (Grades K-12) from the University of West Florida.

I have a passion for all things outdoors. I love doing adventurous things and I thrive on sharing those experiences with others. With a mind full of questions and a teacher in my soul, my mission is to teach people to love, respect, and protect the environment. I specialize in rock climbing, abseiling, backpacking, and kayaking and I am fortunate to have enjoyed leading adventures all over the world. I am also a Naturalist, passionate about teaching others about issues like climate change and environmental protection.

I am a two-time graduate of the National Outdoor Leadership School (NOLS) completing 32-day programs in both the American Southwest (Outdoor Educator - Backpacking and Traditional Rock Climbing) and in the Wind River Range, Wyoming (Traditional Rock Climbing and Outdoor Leadership).  As an Outdoor Adventurer and Naturalist, with over a decade of experience, I have become an expert at guiding people safely though the wilderness in the areas of traditional and sport climbing, pack-rafting and kayaking, backpacking, and outdoor living.

During my free time, when I am not climbing rocks or looking for creatures in the woods, I enjoy hiking,paddling, cycling, and traveling the world with my wife. My favorite book is Mountaineering: Freedom of the Hills and if I could meet anyone famous it would be Sir David Attenborough or Steve Irwin, The Crocodile Hunter.

Here is a short video of the 31 day back-country rock climbing expedition I completed with The National Outdoor Leadership School. During this course we backpacked over 200km through the Rocky Mountains and climbed in the traditional style all over the mystical peaks of the Wind River Range, Wyoming, U.S.A. 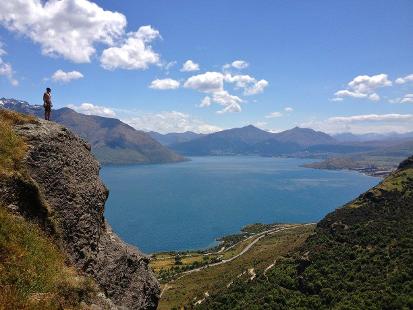 After five successful yet unfulfilling years in the corporate world of management and sales, I started my career in the outdoors by serving as an AmeriCorps volunteer. For two years, I lived in a tent and managed environmental conservation and restoration projects  all over the American Southwest. Projects included hiking-trail construction, invasive plant management, habitat restoration, and endangered species protection.

After completing my AmeriCorps service I worked as a Naturalist for The National Audubon Society, leading school field-trips and paddles on the Chesapeake Bay. My work with the Audubon led me to became the Manager and Head Naturalist of the Piney Run Nature Center in Sykesville, Maryland. While at Piney Run, I continued my career in environmental education while caring for all of the wild animals that called the center their home. I also guided rock climbing, backpacking, and kayaking expeditions all over Appalachia.

After years of getting dirty I realized my true passion was for teaching. In 2013, my wife (a comprehensive school counselor) and I became international educators. Our journey abroad began in Vietnam, at the American International School in Ho Chi Minh City. Over the course of three academic years I taught environmental education, outdoor leadership, physical education and health. Living internationally and exploring the natural wonders of the world has been a life-changing experience.

For the past six years we have been educators for the Korea International School Jeju (KISJ) campus. Jeju is South Korea's largest island and home to several UNESCO natural heritage sites. I was originally hired as the ES/MS Aquatics Coordinator. Given my background, passions, and the natural wonders on Jeju, I advocated for and was given the opportunity to develop an Experiential Education program for both the Elementary and Middle School divisions.

I've created and lead over 25 curriculum based field trips all over Jeju that focus on environmental, historical, and cultural education. I also built a Nature Space in my classroom to provide in-school lessons and help students feel connected to nature as well as the outdoors while indoors. These field trips, also called "GRIT Trips",  are equally designed to cultivate resilience and perseverance in our students,with safety as the highest priority.

Check out this video of my first "television" appearance as a Naturalist representing Piney Run Nature Center on a local community channel in Eldersburg Maryland.  Here, I am introducing my friends the Eastern Screech Owl and Eastern Corn Snake to the audience. The network accidentally misspelled my name in the video title : )

I filmed this short video while exploring the waters around Jeju Island on my Alpacka Packraft. This footage was taken in the protected bay of Wado Island, which is part of the larger Chagwido Marine Preserve located in the Yellow Sea. This preserve provides a habitat for various aquatic wildlife, including bottlenose dolphin, sea otter, cormorant,  gulls, a variety of fish, and coral.These islands were formed by underwater volcanoes approximately 18,000 years ago and represent the amazing geological history of Jeju Island. This area is often frequented by "Haenyeo", the infamous female free-divers of South Korea.

Photo Gallery from my Adventures around the World